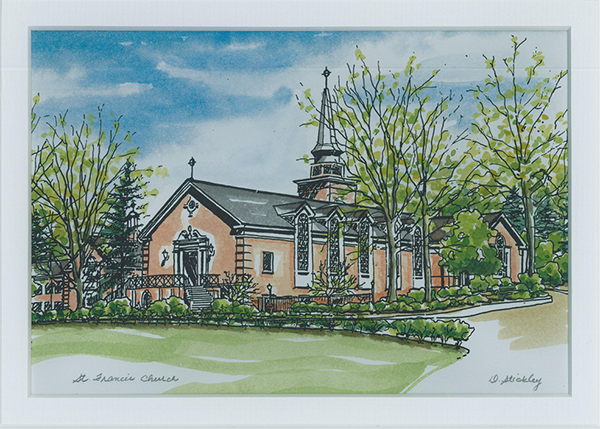 St. Francis Episcopal Church began as a mission church on donated land in what was then the small community of Potomac. Our first Rector, Reverend Martin Lord, served from 1955 until 1967. Reverend Edward Sims was our second Rector, who led St. Francis through 1972. Reverend Almus Thorp was our Rector from 1973 to 1982.

The first building of the church complex was erected in 1955 to house both the worship space and parish fellowship activities. The parish church was completed in 1962. It was designed to reflect a sense of the best of Maryland Colonial architecture and seats 390 people. Growing needs for space and music resulted in the dedication of a large new parish house, St. Francis Hall, and the installation of a large Moller organ in the Sanctuary, both in 1980.

Reverend William Shand was called as our 5th Rector in December 1987. That same year, the Vestry took the bold step of voting to establish the St. Francis Episcopal Day School, which opened in 1988 using the existing Sunday School classrooms. In a few years, the Day School had expanded to include preschool through grade 5, and both the Day and Sunday Schools had outgrown the existing space. The school merged with St. Andrew’s Episcopal School in 2008, a mutually beneficial arrangement. Today, we lease our school space to St. Andrew’s, which houses its lower school classes on our campus.

The educational and administrative spaces were greatly expanded in 1993. In 1997, Reverend Shand commissioned the Twenty First Century Project, a large introspective undertaking that involved over 100 parishioners and 15 study groups. Parishioners took a hard look at their church in order to establish a long-range plan focusing on vibrant spiritual renewal and corporate direction. This project served to lay down markers for the development of St. Francis over the next few years.

Father William Shand served St. Francis for 30 years until he retired in 2015. Our sixth rector, Father Mark Michael, was called to lead St. Francis in 2016. Under his leadership, St. Francis continues to be a strong and vibrant congregation that is committed to praying, singing, learning, helping, playing and loving together.  We invite you to come see us.